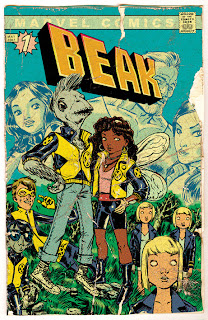 Using a PENTEL-brush-pen, Adobe Photoshop for colouring and Adobe Illustrator for the letters
Hey surfacewellers! I appreciate a happy new year for all of you and stuff like that... and here i got more stuff for you- now its even finished. First is little sketch i made on A4 with a group around the young X-MEN called BEAK, now imagined in his first issue! The drawing was made in june, i rememeber, and on that damn compu-colouring i´ve gone mad, so i choosed the cool pre-nineties-colouring, which i think looks way better now.


till next time, dear HELLOS.
your DONALD HELLO.